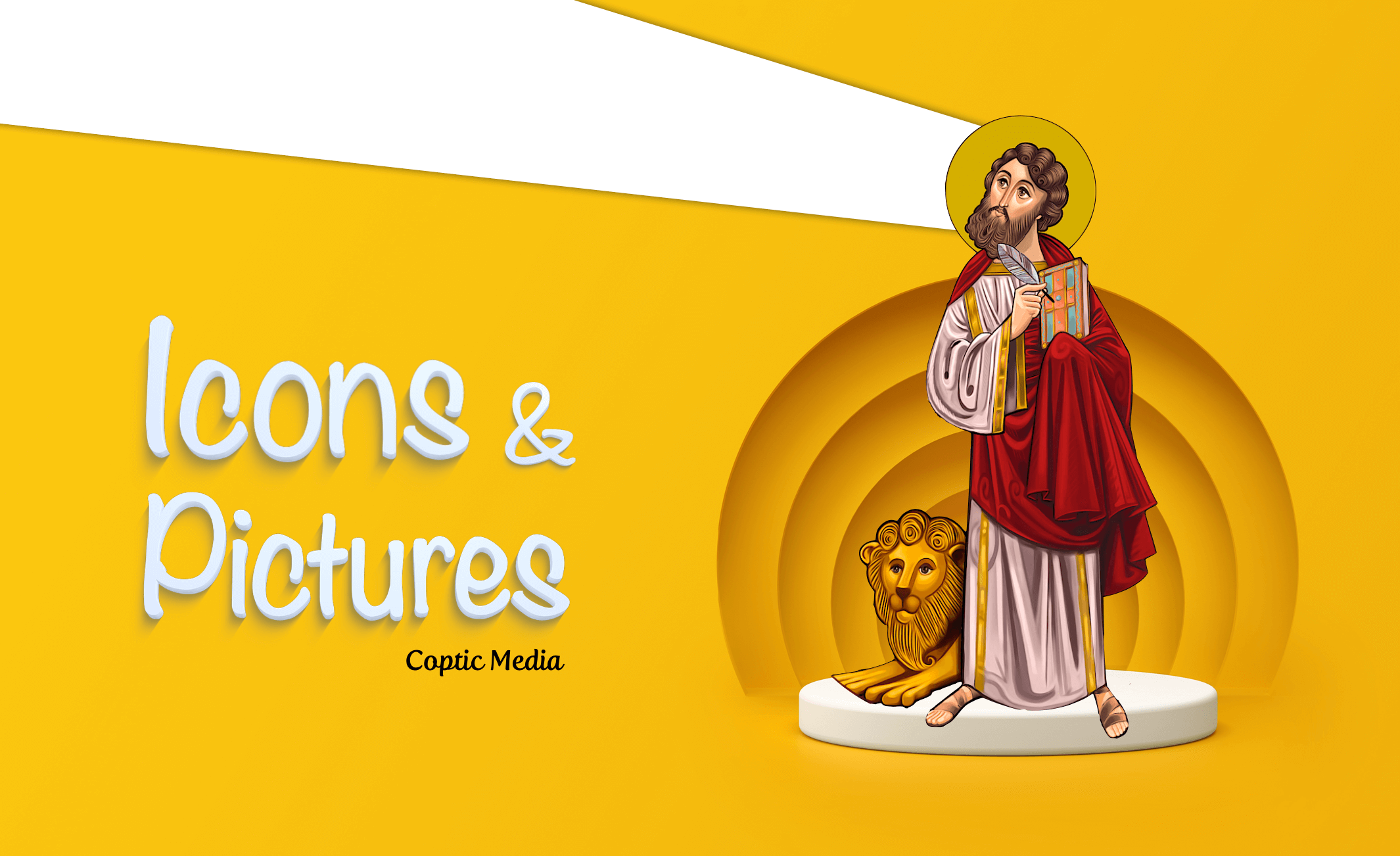 The word “icon” is derived from the Greek “eikon” or from the Coptic word “eikonigow” both of which are similar in their pronounciation. The word icon is used in the Greek Bible in the Old Testament where it says, “Then God said, let us make man in our image …, so God created man in His own image, in the image of God he created” (Genesis 1:26-27). This word is also used in the New Testament (the Greek Bible) in the Epistle of St. Paul to the Colossians, “He is the image of the invisible God“ (Col 1:15).

Historians date the appearance of the iconographic style to the first three centuries of Christianity. Some archaeologists believe that icons were first popular in people’s houses and later began to appear in places of worship, probably at the end of the 3rd century. By the 4th and 5th centuries A.D. their use was widespread. The idea behind the use of icons in the Early Church is due to the unique experience the Church faced. Most Christians converts came from pagan cultures and most of them were illiterate. Many of them had difficulty understanding Biblical teachings and their spiritual meanings, as well as the historical events that took place in the Bible and in the life of the Church. Therefore, the leaders of the Early Church permitted the use of religious pictures (icons) because the people were not able to assimilate Christianity and its doctrine unaided by visual means. Therefore, these presentations aided the faithful in understanding the new religion and, at same time, illustrated it.

With the conversion of the Roman Emperor Constantine (307-337 A.D.) to Christianity, the situation changed radically. The Emperor hastened the triumph of Christianity over paganism by forbidding idolatry. The statues of the pagan gods were removed from the capital. Icons were used to decorate churches and state buildings. It is important to point out the role of the Patriarch Cyril I (404-430 A.D.), (also known by the name of Kyrillos the Pillar of faith), the 24th Coptic Pope. He permitted icons to be hung in the Patriarchate and all the churches in Egypt.

With the spread of icons in the centuries after the Emperor Constantine, Christians began to use icons in ways that were never intended, becoming more concerned with the art itself rather than as a tool for prayer or Christian instruction. Icons were never meant to be worshiped or venerated as something holy in themselves. The reverence shown to an icon must be done with the understanding that it is not the icon or artwork itself we are respecting, but rather the person or event it portrays. An icon is meant to be a window into the spiritual world, used to help us contemplate spiritual matters or to put us into a prayerful frame of mind, as a reminder of events in the Bible, the life of Christ and the Saints, but never as an object of worship.

A movement arose in the 8th century opting for the elimination of icons from churches on the grounds that they were being worshiped as graven images. They based their ideas on the Biblical verse, “Thou should not make unto thee any graven image, or any likeness of anything that is in the earth beneath, or that in the water under the earth, thou shalt not bow down thyself to them, nor serve them” (Exodus 20:4-5). One of the key figures “Lawon el-Esafry” and his followers were involved in the destruction of many icons during this period, which is known as the Iconoclast (icons-destruction) controversy. It is interesting to note that during the reign of Emperor Leo III in the 8th century, the Iconoclast Controversy began and became a serious conflict in the Church. This coincided with the Moslem invasions of Syria, Iraq, Egypt and Persia. The Christian holy places in Jerusalem fell into Moslem hands. During this conflict the two most prominent theologians who stood to defend the use of icons in the Church were St. John of Damascus (675-749 A.D.) and St. Theodore of Studios (759-826 A.D.) at the 7th Ecumenical Council of the Eastern Orthodox Church in 787 A.D.

Although Christianity prohibited the worship of idols, the use of icons in the proper way was not banned due to the reasons mentioned before. History relates that the use of icons in the Church has its Christian roots from the time of Christ. There is a number of historical documents for these. First, it is known that the Evangelist Luke was a talented painter as well as a physician. He painted an icon presenting the Virgin Mary holding the Child Jesus, which many churches all over the world later on copied. Also, in a reference mentioned that the historian “Van Celub” found an icon of the Archangel Michael during his visit to a Cathedral in Alexandria, that was made by the Apostle Luke. Second, an icon the Savior made without hands, goes back to the first century when king Abagar of Edessa (located between the two rivers, Euphrates and Tigris, an area in eastern Iraq) sent a message with his envoy Ananius to the Lord Jesus Christ to ask if He could visit the king to heal him. The king suffered from diseases and he wished to the Lord would come and live in his kingdom.

Ananius the envoy was a talented artist, and tried to paint a picture of the Lord, however the glory and the perfect appearance of the Lord was so great that he was unable to do so. The story says that the envoy went back to the king with a piece of cloth that had an image of Christ’s face. The image of the Holy Face of Christ healed the king of his diseases in the absence of Christ himself, the Holy image had power to effect the healing of the king. The legend is saying virtually the same as St Paul says “But we all, with open face beholding as in a glass of the Lord, are changed into the same image from glory even as by the spirit of the Lord” (2-Cor 3:18). This story and the two letters were copied word for word and published (in pages 56 and 57) in the book of “The History of the Church” by the early Christian historian Eusebius of Caesaria [264-340 A.D.]. Third, another story of early icon use involves the woman in (Luke 8:43) that Jesus Christ healed from a twelve year bleeding. The woman had drawn on the door of her house (in village of Banias, near the source of the Jordan river) a representation of Christ and another of herself lying prostrate at his feet. The historian Eusebius of Caesaria has cited this in his book “The History of the Church” after he saw the image at the woman’s house which was still intact at the time of his visit in the 3rd century. Therefore, an icon can be used in the service of the Gospel and the Holy Tradition of the Church, not a mere artistic device. Icons are windows into heaven. A believer meditates on the person whose portrait is on the icon. In this way an icon may play a role in enhancing the spiritual life of the believer through the imitation of the life of the person in the icon.

Therefore, icons can be a blessing in our lives if we use them in a spiritual way. An icon is not merely a piece of art, but it carries a lot of spiritual meaning in our lives. The center of Christian faith, is that “The Word became flesh” (John 1:1). It is not surprising to see that the loving and merciful face of our Lord Jesus Christ is the subject of most icons.

The art of making Orthodox icons follow certain symbolism that carries a meaningful message. Some of these characteristics are: First, large and wide eyes symbolize the spiritual eye that look beyond the material world, the Bible says “The light of the body is the eye: if therefore thine eye be simple, thy whole body shall be full of light” (Matthew 6:22). Second, large ears listen to the word of God; “If any man have ears to hear, let them hear” (Mark 4:23). Third, gentle lips to glorify and praise the Lord “My mouth shall praise thee with joyful lips“ (Psalm 63:5). The eyes and ears on a figure in an icon are disproportionately large, because a spiritual person spends more time listening to God’s word and seeking to do God’s will.

On the other hand, the mouth, which can also be often be the source of empty or harmful words is small. The nose, which is seen a sensual is also small. Also, when an evil character is portrayed on an icon, it is always in profile because it is not desirable to make eye contact with such a person and thus to dwell or meditate upon it. Figures in Coptic icons often have large heads, meaning that these are individuals devoted to contemplation and prayer. Icon artists deeply understood the meaning and benefit of icons on the spiritual life of the believers. It is interesting to note that the majority of the Coptic icons’ artists did not sign their names. They were not looking or self-glorification and fame, even the few who signed their names did so in the form of a prayer; such as “Remember O Lord your servant (name)”. Some icons portray Saints who suffered and were tortured for their faith with peaceful and smiling faces, showing that their inner peace was not disturbed, even by the hardships they endured, and suffered willingfully and joyfully for the Lord. Although the aristic style of iconography varies a little from one culture to another, all Orthodox icons have the same meaning, usage and symbolism (this includes the Eastern Orthodox Churches; Greek, Russian, Serbian, Bulgarian, … etc, as well a the Oriental Orthodox Churches; Coptic, Armenian, Syrian, Ethiopian, … etc).

In conclusion, icons in the Orthodox tradition are not to be taken as art for art’s sake but rather, they are to be used as windows into spiritual world, designed to help us achieve a prayerful mind set and lead us into a life of prayer and contemplation. The interested reader might want to check the icons.