The word “Coptic” is derived from the Greek word “Aigyptos” meaning “Egyptian”. The modern use of the term “Coptic” describes Egyptian Christians, as well as the last stage of the ancient Egyptian language script. Also, it describes the distinctive art and architecture that developed as an early expression of the new faith.

The Coptic Church was established in the name of our Lord Jesus Christ by St. Mark the Evangelist who brought Christianity to Egypt during the reign of the Roman emperor Nero in the first century, a dozen of years after the Lord’s ascension. He was one of the four evangelists and the one who wrote the oldest canonical gospel. The Coptic Church, which is now more than nineteen centuries old, was the subject of many prophecies in the Old Testament. Isaiah the prophet says “In that day there will be an altar to the LORD in the midst of the land of Egypt, and a pillar to the LORD at its border.” (Isaiah 19:19). 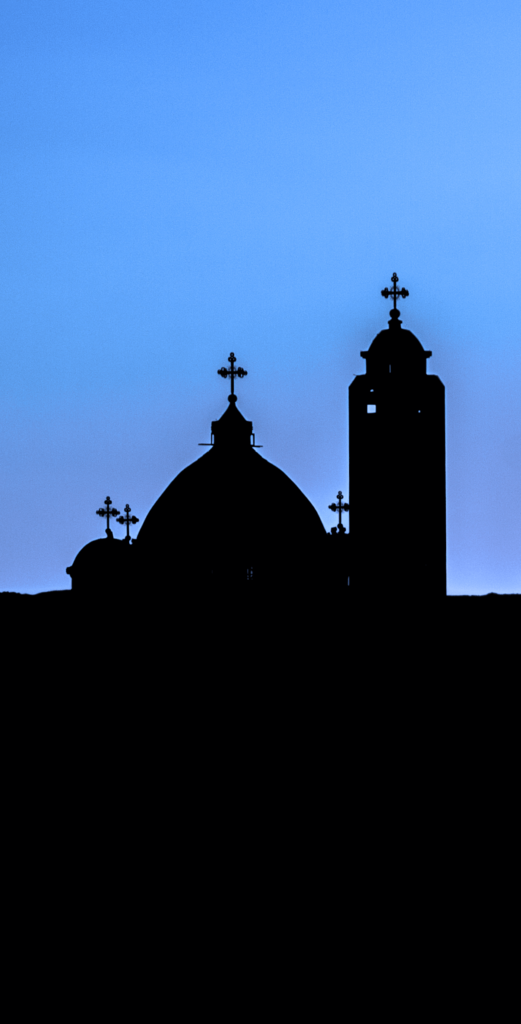 The Coptic Orthodox Church worships the Father, the Son and the Holy Spirit in the Oneness of Nature. We believe in One God; Father, Son and Holy Spirit, three equal Co-Essential and Co-Indwelling Hypostasis. We Believe that Lord Jesus Christ, the Only-Begotten of the Father and Who is One with Him in Essence is the only Savior of the world.

The Coptic church regards itself as a strong defendant of Christian faith. The Nicene Creed, which is recited in all churches throughout the world, has been authored by Saint Athanasius, the Pope of Alexandria for 46 years, from 327 A.D. to 373 A.D. This status is well deserved, after all, Egypt was the refuge that the Holy Family sought in its flight from Judea: “When he arose, he took the young Child and His mother by night and departed for Egypt, and was there until the death of Herod, that it might be fulfilled which was spoken by the Lord through the prophet, saying, “Out of Egypt I called My Son” (Mathew 2:14-15).

The contributions of the Coptic Church to the Christian world are many. From the beginning, it played a central role in Christian theology and especially to protect it from the Gnostics heresies. The Coptic Church produced thousands of texts, biblical and theological studies which are important resources for archeology. The Holy Bible was translated to the Coptic language in the second century. Hundreds of scribes used to write copies of the Bible and other liturgical and theological books. Now libraries, museums and universities throughout the world possess hundreds and thousands of Coptic manuscripts.

The Catechetical School of Alexandria is the oldest Catechetical School in the world. Soon after its inception around 190 A.D. by the Christian scholar Pantanaeus, the school of Alexandria became the most important institution of religious learning in the Christian world. Many prominent bishops from many areas of the world were instructed in that school under scholars such as Athenagoras, Clement, Didymus, and the great Origen, who was considered the father of theology and who was also active in the field of commentary and comparative Biblical studies. Origen wrote over 6,000 commentaries of the Bible in addition to his famous Hexapla. Many scholars such as Saint Jerome visited the school of Alexandria to exchange ideas and to communicate directly with its scholars. The scope of the school of Alexandria was not limited to theological subjects, because science, mathematics and the humanities were also taught there: The question and answer method of commentary began there, and 15 centuries before Braille, wood-carving techniques were in use there by blind scholars to read and write. The Theological college of the Catechetical School of Alexandria was re-established in 1893. Today, it has campuses in Alexandria, Cairo, New Jersey, and Los Angeles, where priests-to-be and other qualified men and women are taught among other subjects Christian theology, history, Coptic language and art including chanting, music, iconography, tapestry etc.

Monasticism was born in Egypt and was instrumental in the formation of the Coptic Church’s character of submission and humbleness, thanks to the teachings and writings of the Great Fathers of Egypt’s Deserts. Monasticism started in the last years of the third century and flourished in the fourth century. Saint Anthony, the world’s first Christian monk was a Copt from Upper Egypt. Saint Pachom, who established the rules of monasticism, was a Copt. And, Saint Paul, the world’s first anchorite is also a Copt. Other famous Coptic desert fathers include Saint Makarios, Saint Moses the Black, and Saint Mina the wondrous. By the end of the fourth century, there were hundreds of monasteries, and thousands of cells and caves scattered throughout the Egyptian hills. Many of these monasteries are still flourishing and have new vocations till this day. All Christian monasticism stems, either directly or indirectly, from the Egyptian example: Saint Basil, organiser of the monastic movement in Asia minor visited Egypt around 357 A.D. and his rule is followed by the eastern Churches; Saint Jerome, who translated the Bible into Latin, came to Egypt around 400 A.D. and left details of his experiences in his letters; Saint Benedict founded monasteries in the sixth century on the model of Saint Pachom, but in a stricter form. And countless pilgrims visited the “Desert Fathers” and emulated their spiritual, disciplined lives. There is even evidence that Copts had missionaries to Nothern Europe. One example is Saint Moritz of the Theban Legion who was drafted from Egypt to serve under the Roman flag and ended up teaching Christianity to inhabitants of the Swiss Alps, where a small town and a Monastery that contains his relics as well as some of his books and belongings are named after him. Another saint from the Theban Legion is Saint Victor, known among Copts as “Boktor”.

Faith of the Coptic Church

The Coptic Orthodox Church worships the Father, the Son and the Holy Spirit in the Oneness of Nature. We believe in One God; Father, Son and Holy Spirit, three equal Co-Essential and Co-Indwelling Hypostasis. The Blessed and Holy Trinity is our One God. We Believe that Lord Jesus Christ, the Only-Begotten of the Father and Who is One with Him in Essence is the only Savior of the world.

Coptic Church Near You

Daily, in all Coptic Churches all over the world, we pray for the reunion of all Christian Churches. We pray for the world’s peace and for the well-being of the human race. We warmly welcome you and look forward to meeting you in one of our churches: